Zombies have been a part of popular culture since the early 20th Century but were finally given their first big break with George A. Romero’s 1968 classic Night of the Living Dead. Currently experiencing an over decade-long revival with no end in sight, reanimated corpses are ubiquitous thanks to the continual stream of content like TV’s The Walking Dead (adapted from a comic) and the Brad Pitt-starring World War Z (which is somewhat adapted from a novel). Let’s take a look back at the signposts of the genre’s evolution with the best of the bunch: 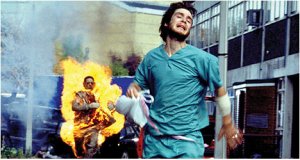 Love it or hate it, Danny Boyle’s 28 Days Later introduced the world to fast zombies (or “the infected” as they’re known here), casting aside the usual shambling undead and scandalizing fanboys in the process. Taking place in a post-outbreak London, 28 Days Later sports a pedigreed British cast, a gritty digital look to compliment the grim tone, and a propulsive pace backed by a typically strong soundtrack that we’ve come to expect from consummate music-lover Boyle. The shots of a deserted London are haunting and immediate, and are backed by sympathetic characters and a strong, if overt, allegory (the virus that infects the populace is dubbed the none-too-subtle “Rage”).  The ending devolves into relative mindlessness compared to the more thoughtful first two thirds, but becomes instantly iconic when the graphic violence is married to the epic track “East Hastings” by Montreal collective Godspeed You! Black Emperor. Call the zombies “infected” if you must, but don’t discard this stylish, pounding flick that shows that Boyle can handle horror as well as any other genre.

28 Weeks Later is a worthy follow up that introduces a new group of (well cast) survivors and features Jeremy Renner before he became ubiquitous. While 28 Days pulled its punches and held off on a truly downer finale (which can still be seen as an alternate ending on the DVD), 28 Weeks goes all-in and is better for it. 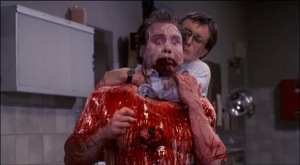 Featuring stellar practical effects and a career-making performance from Jeffrey Combs, Re-Animator is a Frankenstein tale remodelled into a gristly contemporary romp. Clearly a product of its time, the film is aided immeasurably by gruesomely inventive gore and the wild-eyed Combs as maniacal Dr. Herbert West. First time director Stuart Gordon plays off the typical fears of science gone mad and escalates the craziness so steadily that by the time a severed zombie head is attacking a bound woman, you can’t help but marvel at the audacity of it all and grin along with this crazy flick. It’s over-the-top grotesquerie done right with a knowing wink.

Although a belated sequel was made (2003’s cheapo Beyond Re-Animator), it’s the film Gordon followed up Re-Animator with that’s worth checking out. An adaptation of an H.P. Lovecraft story, From Beyond is again about man’s hubris which manifests itself here in the form of an inter-dimensional portal that allows deformed and malevolent creatures to enter our world. The plot’s little more than an excuse to show off some of the most disgusting and disturbing effects this side of Cronenberg, making From Beyond a midnight movie full of nightmare fuel that’s best watched with some beers and buds. 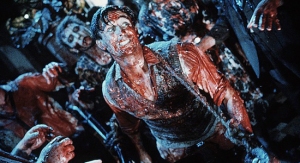 Nine years before he’d wow the world with a certain Tolkien adaptation, a then-relatively unknown Peter Jackson directed the splattery undead classic Dead Alive. With a heightened tone that occasionally veers into outright comedy, Dead Alive brings buckets of gross-out gags along with memorably wicked characters and a totally bonkers plot. Combining and remixing elements of Hitchcock’s Psycho and Pink Floyd’s mother issues from The Wall, the young lead Lionel has to look after his ailing mother Vera after she’s bit by a Sumatran rat monkey and comes down with a bad case of becoming a zombie. What follows is a descent into total madness featuring renegade priests (“I kick ass for The Lord!”), giggling zombie babies with a habit of bursting through heads, and the bloodiest climax in perhaps any movie ever made (hint – it involves a lawnmower turned on its side and brandished as the ultimate zombie killing machine). It’s hard to imagine that a movie this insane, violent and transgressive even exists (thank you New Zealand!), yet alone was directed by a now-Oscar winner. Savour early Jackson and bring a raincoat – it’s gonna get wet.

Another example of a now-huge director (in this case James Gunn of Guardians of the Galaxy) previously finding success in genre fare, Slither is an under-the-radar horror comedy that finds squicky scares and big guffaws in equal measure. Featuring giant space slugs and Michael Rooker as the insane Grant Grant, this movie is above all fun. 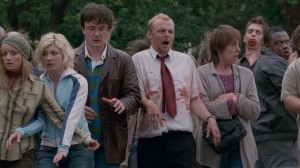 Riding a wave of renewed interest in zombie movies, Edgar Wright brought Shaun of the Dead to the masses and created a new genre in the process (the zom-rom-com or zombie romantic comedy). Laden with a clear love and respect for what came before but bold enough to forge its own identity, Shaun of the Dead was the first of three collaborations between Wright and actors Simon Pegg and Nick Frost in what would become The Cornetto Trilogy. The hook here is the mundaneness of the whole situation, and how long it takes the leads to clue in to the world gone mad around them as they shake off their hangovers. With its distinctive quick cuts (which begin in mundane situations until escalating to gearing up for the apocalypse), great use of diegetic music (Queen’s “Don’t Stop Me Now”), and knowing references and homages (“We’re coming to get you Barbra!”), Shaun combines clear action beats, highly quotable comedy and well-drawn characters to create a balanced and near-perfect cinematic experience.

Both of the above owe a clear and significant debt to Shaun’s genre-bending. In Zombieland, quick-witted survivors scour a post-zombie outbreak America while spouting pop-culture references and forging alliances that provide laughs and stakes. Warm Bodies is an inspired Romeo and Juliet tale with zombies and humans replacing Montagues and Capulets that’s heavily absurd yet still relatable. Zombies and comedy – two great tastes that go together well. 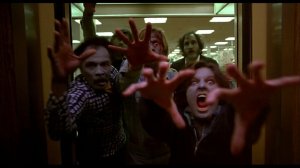 The pinnacle of zombie filmmaking, Romero’s masterpiece remains unmatched to this day. Zombie films have been reworked, rebooted and redone, but at the heart of the concept lies the allegorical idea that man’s inhumanity to man is far worse a threat than any zombies pose. The apocalypse is merely the catalyst that speeds along this realization. Taking place mostly in a Pittsburgh mall, Dawn of the Dead is both a wish fulfillment fantasy (a whole mall to ourselves!) and a depiction of a horrific dystopia (everybody outside this mall wants to eat my brains!). The at-times languid pace allows you to identify with the characters until “there’s no more room in hell and the dead walk the Earth.” Taking aim at consumerism, hawkish military mindsets and man’s tendency towards entropy and chaos, Dawn is dark satire at its finest.  Come for the masterful Goblin soundtrack and bright red effects by Tom Savini, stay for the veiled social commentary and tightly woven story. Not unlike a steaming pile of brains after a long day of moaning and shuffling, Dawn of the Dead is a satisfying meal.

The granddaddy of all zombie films, Night of the Living Dead is required viewing for all fans of the genre. While its impact has been blunted in intervening years (like a great song that’s been covered too often), it still holds a primal power that’s heightened by the black and white cinematography. Day of the Dead and Land of the Dead prove that as Romero’s Dead series went on, they arguably became less potent but remained enjoyable.

That’s my list – what did I miss? Feel free to take a cricket bat and bludgeon this list over the head in the comments below. You’ve got red on you.