Crass commercial concerns battle vibrant artistic impulses in Disney’s latest joy ride Tomorrowland. Writer/director Brad Bird proves fallible after an astonishing run of hits (The Iron Giant, The Incredibles, Mission : Impossible Ghost Protocol (a dumb name but a good entry)), as even his steadying hand can’t rescue what’s ultimately a sour message at the heart of Tomorrowland. While the film occasionally soars on the wings of some inventive production design and whiz bang action sequences, it sags under an ostensibly hopeful ethos that feels more like a misplaced nostalgia for a past that never existed and a future that will never come.

Establishing a female lead in a summer event movie is a step in the right direction, as plucky teen Casey Newton (Britt Robertson) is first glimpsed as a righteous vandal who’s fighting a losing battle against the tear down of a NASA launch pad in Cape Canaveral. She not only yearns for a time of optimism in which the U.S. government was actually willing to spend money on space travel, but she’s further galvanized by the fact that her father (Tim McGraw) is an out of work NASA engineer who’s literally manning the crane to destroy his dreams.

Casey is the type of character who’s not burdened by a distant family, but is instead encouraged to follow her dreams. Her glass-half-full philosophy shines in school when she challenges nay-saying teachers who are predicting all manner of apocalypses with “How can we make it better?” And while teens can certainly be self-involved, her classmate’s groans at this suggestion feels somewhat tone-deaf. Casey’s fate changes when she’s pinched by the cops during one of her late-night raids,and is given a mysterious button upon her release from jail.

The button, stamped with a stylized T, transports her (and only her) to a wondrous, gleaming world of the future whenever she holds it. This Tomorrowland (as it comes to be known) is a futuristic utopia populated with magnetic trains, numerous jetpacks, glistening towers, and yes, a seat on a rocket ship just for her. This world of tomorrow is first seen in a lengthy prologue with George Clooney’s boy genius Frank Walker, a precocious 10-year-old inventor of a jetpack who stumbles his way into the city via the It’s A Small World ride of 1964 Disneyland (and is eventually exiled). As Casey’s present-day preview times out, her fate becomes entwined with Frank’s as they both face an inexorable path back to Tomorrowland. 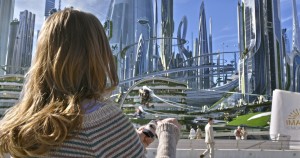 Casey glimpses The World of Tomorrow

They’re helped along the way by the seemingly young Athena (Raffey Casidy) – a recuiter for Tomorrowland who hasn’t been back in years, while robot soldiers of the evil General Nix (Hugh Laurie) stalk their every move. The movie spends a surprisingly long amount of time in the present-day U.S., as Casey’s path towards the reclusive Frank is a lengthy one. When they finally head towards Tomorrowland (via a secret compartment in the Eiffel tower in a fun sequence) it finally feels as though the movie is ready to ramp up, but instead it further sags from there.

Part of the problem is that – despite a rousing score from Michael Giacchino – the action feels perfunctory and bland. The design of Tomorrowland (both the movie and titular city) is mostly wondrous at first (and Frank’s inventions are novel), but there’s a weightlessness and sameness that feels increasingly common in CGI-heavy movies such as this one. The movie has a small cast of characters too, so there’s rarely any feeling of real danger behind NIx’s threats. And then there’s Nix himself and his ultimate evil plan that our heroes must race to stop.

Without going into too much detail (although if you’re sensitive to spoilers skip to the next paragraph) it’s revealed that Nix is simply speeding up the destruction of our planet to save Tomorrowland from ourselves. He’s allowed the brightest and best into his utopia and will let everyone else perish because we’re all – wait for it – Debbie Downers. We’ve stopped reaching for the stars and are obsessed with the apocalypse, bringing about our demise through a kind of self-fulfilling prophecy. This feels like the movie’s thesis in a nutshell – a call for optimism in a time of great strife.

The problem is that this message comes in a movie that’s hollow and nakedly commercial – there’s Tesla cars (and future tech) everywhere, Athena prominently displays a package of Oreos in a way that would make Wayne Campbell blush, and the characters (who lose 90% of their blood sugar upon using a teleporter) recharge themselves by chugging a Coca-fucking-Cola. So the filmmakers are shitting on modern society’s obsession with the end-times (which has produced some legitimate works of art like the recent Mad Max: Fury Road, a far superior film) while implicitly suggesting we replace it with, what, consumerism?

To be fair, the movie suggests that we need to gather our best and brightest and allow them to dream again (a similar message to Interstellar, which also advocated a return to space travel). But we’re ostensibly already moving towards a crowd-funded future where hopefully some semblance of a meritocracy will exist, allowing the most progressive ideas to be actioned. Tomorrowland‘s future involves a secret world where the sharpest minds are recruited and allowed to work in peace, which brings to mind the Objectivism and elitism claims against Bird’s earlier works (which were mostly unfounded but hold weight here).

It’s an ugly message wrapped in a shiny veneer, and Tomorrowland (despite some winning individual moments and a rare female lead) does a poor job of selling it. Keep your utopia and make my future one that’s thrillingly complex and nuanced, and doesn’t just exist to sell shit.