Thunderball finds James Bond in his biggest (and most financially successful) entry yet – an underwater romp that continued to expand many series elements including: budget, runtime and outrageous Bond antics.

A longer length gives Thunderball time to stretch and a chance at more character depth, but the film opts instead to stage elaborate set pieces, many of which take place underwater. While the action below the sea doesn’t hold the wow factor it must have upon release, Connery continues to slur and charm his way through exotic locales against an increasingly bold array of dastardly villains and wily femme fatales.

Directed by Terence Young, with Sean Connery as James Bond (for the 4th time)

It’s a slow paced torch song, crooned by the inimitable Tom Jones. Playing over a bevy of swimming beauties during the opening credits, the theme is catchy but lacks a certain punch despite Jones’ presence. The lyrics, however, are amazing and hilarious. A small taste: “Any women he wants he gets / he will break any heart without regret.” Bond, you cad!

Bond’s 4th film has a relatively straightforward plot: SPECTRE agent Emilio Largo (a.k.a. Number 2, played by Adolfo Celi) has absconded with two nuclear warheads. He’s stashed them underwater and out of sight after utilizing a doppelganger pilot to hijack the weapons. Largo plans to ransom the U.S. and U.K. governments for £100 million in untraceable diamonds, lest he nuke a coastal city. With MI6 agents scattered around the globe and no solid leads, Bond is dispatched to Nassau to track the missing pilot’s sister, the ravishing Domino Derval (Claudine Auger). 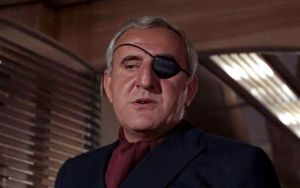 All good villains have an eyepatch, right?

The opening sequence, which finds Bond attending the funeral of a fallen SPECTRE agent, is notable for Bond fighting the clearly still alive baddie who’s dressed in drag as his own widow. After Bond beats the shit out of this dude in a dress, he runs to the roof and narrowly escapes using a jetpack to fly to his waiting Aston Martin! It’s as great as it sounds and feels exactly like a swinging 60’s spy movie should.

From there Thunderball gets a little quiet, with an early highlight in the high-jacking of the plane carrying the bombs, which then lands on water and submerges beneath the surface to meet Largo’s forces. Bond himself is stuck at a rehab clinic for much of the first half and doesn’t really get physical until the second. Your mileage from there will vary, depending on how much you enjoy slow moving underwater fights. Bond’s one-man assault on Largo’s seaside complex is well-staged, especially the fight in (and subsequent escape from) a shark tank that actually feels dangerous. It’s kind of novel to have these huge battles take place underwater (and the climax goes really big, with tons of men on either side), but often times it just feels slow. A lot of people get shot by harpoons.

Bond’s first romantic rendezvous involves a nurse at his clinic that he blackmails into sex after his stretching machine malfunctions. “My silence could have a price” is the way he phrases it – stay classy Bond. Later he crosses paths with the devious but beautiful SPECTRE agent Fiona Volpe (Luciani Paluzzi), whom he quickly beds despite knowing she’s an enemy (Bond’s justification: “What I did this evening was for king and country!”). Volpe calls him out for his wicked ways and she refuses to break good (as so many femme fatales do) despite her roll in the hay with Bond. It’s amusingly self-aware that the movie even references this trope, although Thunderball stays the usual course (in which “bad” women are punished for being sex-positive) by killing off Volpe later when Bond throws in front of her own henchman’s line of fire.

The main Bond Girl is Domino Derval, sister to the abducted pilot and mistress to main baddie Largo. Coincidentally, Bond must get close to her in order to crack the case. The two first meet-cute underwater, with Bond remarking “you swim like a man” once they surface. I guess that’s a compliment? He seduces her in a lavish casino in Nassau, stealing her off the arm of Largo and ordering Beluga caviar and Dom Perignon like a boss. The best part? They consummate their love (lust?) during an underwater sex scene. I don’t exactly know how that would work, but it creates a lot of bubbles.

Vargas is a weirdo with cool shades

Thunderball is big and bright, with a straight A-to-B plot that gives Bond plenty of time to luxuriate in simply being his devilish self. (When Bond startles a naked Volpe in the tub she demands something to wear, prompting Bond to hand her stilettos, ease into a lounger and smile a wide cheshire grin). The action is at times underwhelming, but the climax goes big and features lots and lots of deaths-by-harpoon. The underwater sequences are mostly refreshingly different but at times slow-paced. Largo himself proves to be a worthy adversary (if not quite as iconic as Dr. No or Goldfinger) and his sweet eyepatch and pool of man-eating sharks go a long way towards making him memorable. In all, Thunderball proves to be a worthy entry that has the unfortunate luck of following some truly standout efforts.

James Bond will return in You Only Live Twice…