Bond enters blockbuster status in the massively successful Goldfinger, as many of the series iconic elements are cemented in what’s widely considered to be the British spy’s quintessential adventure.

It’s all here – a larger-than-life villain, femme fatales, secret gadgets, and a certain rakish, tuxedo-clad gentleman at the centre of it all, portrayed once again by famed Scotsman/booze enthusiast Sean Connery (legend has it he spent a week getting drunk to get into character), who truly makes the role his own in his third outing.

Directed by Guy Hamilton, with Sean Connery as James Bond (for the 3rd time)

Instantly iconic! Shirley Bassey sings her first (and possibly best) of many Bond themes in what would prove to be a lengthy artistic collaboration as “Goldfinger” set the (ahem) gold standard for Bond themes. The credits are projected over women clad only in gold paint and bikinis as Bassey hits operatic highs in a song that’s big, brassy and bold, perfectly setting the mood for a movie that shares all those qualities. Unassailable and unforgettable, “Goldfinger” is an all-time great.

Unlike the previous two entries, Goldfinger makes few attempts at continuity (other than returning MI6 members) and instead stands alone as Bond’s biggest adventure yet (with a budget equal to the previous two films combined). This time around it’s Auric Goldfinger (Gert Fröbe) as the big bad. The movies presents his as a Brit (with an inexplicable German accent, present only because he’s played by a German) whose hobbies include: dressing in gold, smuggling gold, selling gold, killing women with gold, and generally loving gold more than life itself (Mike Myers would later perfectly satirize this in Austin Powers in Goldmember).

He loves only gold… and mint juleps

Bond, fresh off blowing up a drug lab in Cuba, quickly infiltrates Goldfinger’s operations but finds himself a captive for much of the film. The two do battle in Miami, Switzerland, Kentucky and over the skies of the U.S. as Bond tries to thwart the maniacal villain’s plot to upset the world gold market by detonating an atom bomb in Fort Knox (and making himself rich in the process). Bond drinks, punches and charms his way through the film, and is aided by erstwhile CIA chum Felix Leiter and the memorable (and absolutely insanely monikered) femme fatale Pussy Galore.

In the opening sequence (unconnected to the main plot, a trope that started with Goldfinger and continued on for much of the series) Bond blows up a drug lab real good and then retires to his hotel room for his just desserts. While there, he makes out with a woman and sees a thug reflected in her eyes – throwing her in harm’s way to save himself (very cold James, not a cool move). The ensuing fist fight establishes Connery’s Bond as man of action as he electrocutes the thug in the bathtub. Of course, Bond’s blithe retort is “Shocking, positively shocking”.

No time for love – Bond’s got booze to guzzle

Goldfinger himself is introducted a mere 10 minutes into the film and after meet-cute at a Miami hotel and a heated game of golf, Bond tracks Goldfinger to Switzerland. Bond narrowly avoids being killed by a female sniper and infiltrates Goldfinger’s Swiss smuggling operation, leading to an extended car chase wherein he gets to use the Aston Martin’s smoke screen, oil slick, bulletproof shield, and YES!, an ejector seat. From here Bond is captured and spends much of the film in custody, but gets a chance to shine once again in the climax at Fort Knox. His fight with memorable hat-throwing henchman Odd Job is well-staged, as the nigh-unstoppable mute Korean throws Bond around and appears on the verge of victory until Bond tricks him into being electrocuted (kind of a theme in Goldfinger), leading to this exchange:

The rest of the final sequence finds Goldfinger leading a full-fledged army against Fort Knox in epic scenes that likely sucked up much of the film’s budget. Pussy Galore goes from bad to good, and even Felix Leiter gets in on the action by leading the U.S. troop surge that overwhelms Goldfinger’s forces. There’s a nice tag at the end when an on-the-loose Goldfinger shows up on Bond’s plane (en route to the White House, “I told the stewardess, liquor for three.There are no other two”) and a window is shot out, leading Goldfinger to be sucked out the window and die an ignoble death (“He’s playing his golden harp”).

James’ first interaction with a woman is when he wields one as a human shield in the opening sequence – not a great start for this most traditional (and misogynist) of Bonds. At the Miami hotel Bond is approached by Felix and shoos away his female companion Dink by slurring, “Run along, man talk.” and giving her a smack on the tuckus. Mad Men may have primed us for this, but still… the 60’s were a very different time. It doesn’t get much better for the women Bond comes across, as he seduces Goldfinger’s accomplice Jill Masterson and Goldfinger kills her in retaliation (she’s covered in gold paint and dies of “skin suffocation”). 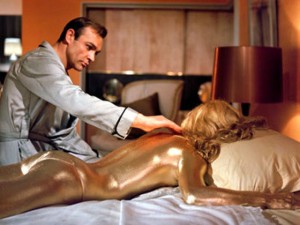 Goldfinger turns the tables on Bond by killing Jill Masterson

Later, Jill’s sister Tilly teams with Bond to kill Goldfinger in Switzerland, but she too dies promptly by the hat of Odd Job. While captive, Bond meet’s Goldfinger’s accomplice Pussy Galore (upon hearing her name Bond quips “I must be dreaming”). Pussy is an independent woman – a pilot who’s trained a squadron of buxom blondes (the planes proudly proclaim “Pussy Galore’s Flying Circus”), who’s also strong-willed, fluent in Judo, and nearly impervious to James’ charms. Of course, she too falls prey to Bond’s insistent advances in a queasy scene as Bond nearly forces himself on her (“Isn’t is customary to grant a condemned man his last request?”). Their relationship is more consensual in the closing moments of the film, as the two lovers embrace after escaping a downed plane and Bond grins “Oh no you don’t, this is no time to be rescued” when Pussy tries to flag down help.

Goldfinger is downright littered with memorable lines and sequences, among them:

Goldfinger might well be Bond’s biggest and most well-known adventure, and for good reason too. The villain is dastardly, the women are seductive and smart, and Bond himself is at his charming best. Bond’s treatment of women is mostly abhorrent (and a step down from the previous entry), but looking beyond that there’s a lot to like here. It’s strange that Bond is a captive for much of the film (and seemingly kept alive through Goldfinger’s charity), but the globe-totting plot and lively interactions between Goldfinger and Bond keep the film moving along. The evil plan is suitable insane and even though Bond may not single-handedly stop it himself, he gets in a great car chase and an eventual showdown with henchman numero uno Odd Job. It may not work as cohesively as the excellent From Russia With Love, but Goldfinger is still an all-time classic that holds up today.

James Bond will return in Thunderball…