Like the child that rebels against hippie parents by being conservative, For Your Eyes Only steers the Bond franchise towards gritty realism after the fantastical sci-fi of Moonraker.

And it’s not a moment too soon, as Bond was in need of a more grounded adventure after literally going to space. At times For Your Eyes Only moves the needle too far in the other direction, showcasing a brutal Bond that is at odds with Moore’s jaunty 007. Does that push-and-pull result in a decent movie?

Directed by John Glen, with Roger Moore as James Bond (for the 5th time)

The Theme Song: “For Your Eyes Only” performed by Sheena Easton

“For Your Eyes Only” is a twinkly, poppy confection sung by Sheena Easton. While seemingly forgettable, it actually has a solid hook and is a catchy earworm that stays with you. Somewhat middle-of-the-road, it also beat out a Blondie song by the same name that would’ve been worse. So, good job producers – you chose correctly.

For Your Eyes Only throws down the gauntlet immediately with a cold open that finds Bond visiting his deceased wife’s grave, and then finding and killing an unnamed bald villain who’s clearly meant to be Blofeld. The movie is both acknowledging Bond’s past and burying it, lending gravitas to his history (though the Blofeld death is almost played for laughs and features lots of cat reaction shots), while simultaneously clearing away his biggest love interest and most frequent foe to make way for new ones.

The main plot centres around the ATAC MaGuffin, a decoding device that’s lost at sea during a violent scene that sees a British spy boat sunk (the camera lingers on the drowning sailors). Bond is in a race against time to secure it before KGB agents close in, bringing back the Cold War conflict of some of the best Bond movies (like From Russia With Love) while keeping the action intense yet reasonably personal.

For Your Eyes Only pulls a switcheroo on the audience, first suggesting that Greek businessman Columbo (Topol) is the main villain, but then teaming him with Bond and revealing the smuggler Kristatos (Julian Glover) to be the true mastermind. Glover’s suave Kristatos is more of a street-level tough, far less outlandish than other baddies that Bond has squared off against (although he’s also a figure skating coach, which doesn’t exactly inspire fear). He’s also a bit of a mirror for Bond, as Glover had screen tested for the role of 007 prior to Live and Let Die.

The pace is relentless, with the set pieces more scaled down but mostly thrilling. There’s a great car chase where Bond drives a Lotus (they must’ve paid a lot for the privilege), later switching to the unconventional Citroën to mark a change of pace. There’s also lots of classic 007 action sequences that have been given a grittier makeover (though the sound effects are often cheesy), including a ski chase (where Bond is on one ski and nearly gets shot on multiple occasions), a submarine scene, and Bond and his ally being dragged behind a boat by Kristatos. 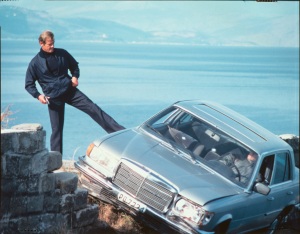 Bond kills in cold blood, which goes against Moore’s portrayal up to that point

The ending is a little underwhelming but the key element that For Your Eyes Only gets right is to make Bond capable but not superhuman. He gets injured (shedding blood, which is a rarity!) and nearly overwhelmed, making his eventual victory all the more triumphant. Also, Tywin Lannister himself (actor Charles Dance) appears as a henchman in one of his first screen roles.

Bond’s love interests range from capable to shrill, making his female foils a lopsided affair. Carole Bouquet plays Melina, a Greek woman whose researcher parents are gunned down in the pursuit of the ATAC, spurring her on to a mission of vengeance. Her story ties into the main theme of the movie – that revenge is destructive – a point Bond knows all too well. Plus she wields a kickass crossbow.

The unfortunate flipside is Bibi Dahl, a young ice skater training for the Olympics who Bond chaperones. In a cringe worthy scene the girlish Bibi attempts to seduce Bond, but thankfully he tells her to “put on your clothes and I’ll get you an ice cream”. All her scenes have a weird sexual undertone and the mere insinuation that this early 20’s girl might have a relationship with the mid-50’s Moore is quite creepy.

Lastly there’s Cassandra Harris as Countess Lisl von Schlaf. Harris (married at the time to future James Bond Pierce Brosnan) brings some unbridled sex appeal to the movie and her character Lisl spends the night with James after meeting at a casino. Inevitably she’s violently murdered by Kristatos’ thugs, proving the trope that all of Bond’s lovers (outside of the main female ally) die shortly after sleeping with him (a.k.a. the law of Bond’s Poison Penis). Their scenes are still effective, and the sex and violence really push the PG rating (PG-13 hadn’t been created yet).

Bond is amazed by the likeness produced by the Identigraph

For Your Eyes Only does a lot right – it brings Bond back down to Earth and marries some fairly intense action to a narrative that actually ruminates on the nature of revenge. It also feels a bit disjointed at times, but that’s fairly common for many of the overstuffed Bond movies. Some of the comedy feels out of place and Bibi Dahl might be the worst Bond Girl yet, but overall For Your Eyes Only is satisfying enough to place it in the middle of the list and count as a win for Moore’s uneven Bond.

James Bond will return in Octopussy (a.k.a. I can’t believe that’s actually the title of the movie)…